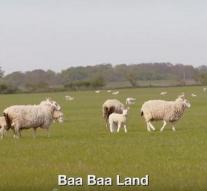 london - An eight-hour film without actors, dialogues or story lines aimed at0 people who like to count sheep, or want to look at it anyway. Those people can soon get their heart on Baa Baa Land.

In English Essex, the film has been recorded. The entire film consists of slow images of sheep in a field. Baa Baa Land was created by the creators of the Calm meditation app.

'We do not expect we to break records in the cinema, but we expect there to be an audience,' said one of the producers of the movie Michael Acton Smith.

According to producer Peter Freedman, it may be the cutest film ever. 'We hope the public will also find that. '

Baa Baa Land is in the movie category slow cinema, known for long, quiet shots and virtually no dialogue or story lines.

In September, the film should be premiere in the Prince Charles Cinema in London. There are talks going on to bring Baa Baa Land to the United States as well.