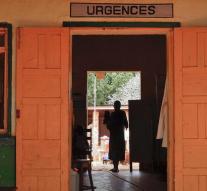 amsterdam/bangui - Doctors Without Frontiers (ASG) relief team have evacuated their employees in a Central African Republic (CAR) clinic after a brutal murder. Two armed men attacked the hospital in Zemio on Tuesday and killed a baby. The girl lay in her mother's arms when she was shot by her head. AzG decided to evacuate the team in Zemio to the capital Bangui.

AzG states that 'the brutality of this attack shows both the arbitrary character of the violence in the CAR and its disturbing increase'. Doctors Without Borders reduce space for relief organizations, as the security situation is worsening. 'Because we have to withdraw our team from Zemio, thousands of people across the region have no access to adequate medical care. ''

The CAR is one of the poorest countries in the world. Since 2013 there has been a civil war between the Christian Anti-Balaka and the Seleka Islamic rebel movement. More than 20,000 people fled to Zemio, according to AzG.