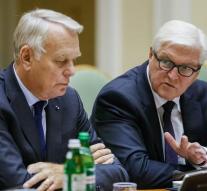 - "The German and French foreign ministers, Frank-Walter Steinmeier and Jean-Marc Ayrault, traveled Thursday for the first time to the east of Ukraine. From the city Kramatorsk controlled by government forces they wish to form an idea of ​​the local situation."

"A few hours before the visit was a cease-fire in which, according to the Head of Mission of the Organization for Security and Co-operation in Europe (OSCE), Ertugrul Apakan was observed reasonable.,, Whether it lasts, does not depend on us but on the willingness of the warring parties to meet each other, '' said Steinmeier."