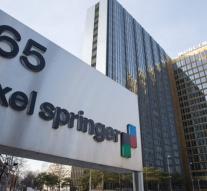 - The German media giant Axel Springer has been on an acquisition in the European travel industry. In particular, the online rental of holiday homes is a priority.

Today it was announced that the Dutch travel companyLeisure Group, in which Axel Springer earlier this year acquired a 51% stake, will take over again two mediators of holiday: peaple and Aan Zee. Previously Topic Travel recruited. Belvilla is the main activity.

According to @ Leisure CEO Björn Berg-Andersen also sit Euro Relais and Casamundo in the group. " Together good for about 400. 000 holiday homes in Europe, the Americas and the Caribbean. "

With the capital and network of Axel Springer's expansion goes according to him. " In the Benelux, but also in Germany and France. We want to grow into the European top three. The booking value is now running at 300 million euros, " said Berg-Andersen. Every year stay in his 1.3 million international tourists in a holiday home withLeisure, which is on the prowl for more acquisitions.

" This way we go into battle with Airbnb, and Booking. com. "

" There are many differences in holiday homes. It is often difficult for consumers to find their way in the internet jungle to the right choice. We want to facilitate better and faster on our websites. For that kind of investment is needed scale, " says Berg-Andersen.