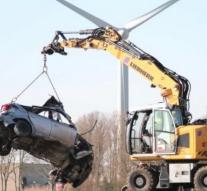 amsterdam - Men who are involved in a collision have on average a damage of 2370 euros. Women are cheaper by 2075 euros.

Figures from a comparison website show that a quarter of the damage is caused by parking, reversing, in and out and returning. One in five damages is on the car. Head-tail collisions are 'good' for 16 percent of calims.

Men and women claim damage almost as often. According to Jolanda van Es van hoyhoy. nl, this will discourage a stereotype. 'Many people think women drive more damage, but we can not confirm that. The difference in the number of claims is minimal. '

Head-tail collisions provide the highest amount of damage. Men, who are likely to drive on the highway, claim an average of 3,226 euros on average after a collision. Women 2494 euros.

Men claim not only higher claims than women, they also run more the chance to get a fatal accident. This is evidenced by additional combined data from the Central Bureau of Statistics (CBS) and the Foundation for Scientific Research Traffic Safety (SWOV).

For almost all age groups, on average, more men than women will die in car accidents. In the most recent measured period, from 2011 to 2015, per billion kilometers traveled kilometers averaged 1.9 men and 1.1 women. Whatever can be read from the data is that traffic has become a lot safer. For each period, the number of fatal casualties decreased.