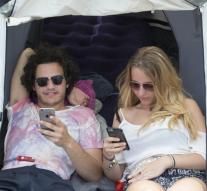 - The number of 06 numbers that can still be provided is decreasing. To avoid a shortage telecom providers must supply limit the numbers to mobile phones, proposed regulatory Authority Consumer Market (ACM) Friday.

The number in the Netherlands issued 06 numbers has now risen to over 54.5 million. Thus, according to ACM provides nearly 91 percent of the available numbers, while the pressure on the 06 numbers will probably remain high in the coming years.

ACM calls telecom providers therefore on for applications that require an Internet connection, such as an ATM or a tablet, using a twelve-digit number 097.,, This way we avoid a shortage of 06 numbers, with all investments for organizations and social costs of that, '' said ACM director Henk Don.