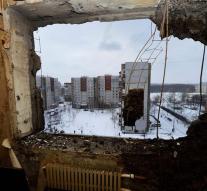 vienna - Poland arrested an Austrian suspected of war crimes in eastern Ukraine. The 25-year-old man would have committed crimes when he fought against the Ukrainian army against pro-Russian separatists.

The Austrian is killed by suspected warriors who had surrendered at Donetsk airport. He would also have killed civilians, according to a spokesman for the Austrian prosecutor's office in Wiener Neustadt.

A few weeks ago a European arrest warrant was issued to the man. Poland will hand the man to Austria.