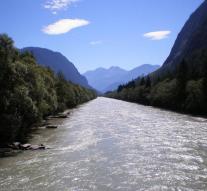 - A 41-year-old Austrian was killed when he went surfing on a rope accelerated in the Alps. The man drowned after he fell and his head snapped on the stones.

He had, according to the Austrian police have tied to a bridge over the River Koppentraun, southeast of Salzburg to hold on to a rope while surfing. The Orientals Richer would thereby not have gotten off the surfboard his foot during the accident.