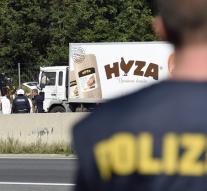 - The Austrian Public Prosecution wants Hungary to take over the investigation into the discovery of 71 corpses in a truck. The bodies of the refugees were found in August by an Austrian highway.

According to the prosecution, the investigation is fully completed on the Austrian side and Hungary now needs to find answers to the question of how the refugees ended up in the truck.

They were probably already dead for two days when they were found and most likely near the Hungarian capital Budapest ingestapt. Vijf people have been arrested in Hungary on suspicion of involvement in the drama and one in Bulgaria.