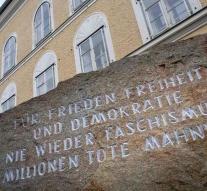 vienna - The Austrian parliament on Thursday approved the proposal by the Government to expropriate of Adolf Hitler's birth house. The building in the town of Braunau am Inn on the border with Germany is owned by a woman who refused to sell.

The owner, Gerlinde Pommer has repeatedly refused in the past to sell or renovate the house. The house was under more of a pilgrimage for neo-Nazis, something the government wants to make. After expropriation Pommer gets a fee. What is not known.

What will happen to the property, is not fixed yet. Break down and replaced by new buildings is the most obvious option. Sobotka Minister of Internal Affairs is in favor of it. But the other option, leave and renovation, is still open. Some historians before, but also councilors who feel that the house fits in the old town and thus is cultural heritage.

Hitler was born on April 20, 1889 in the building of three floors at the Salzburger Vorstadt 15. Two years later the family moved to Linz.