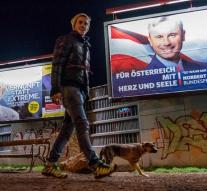 - Around 6.4 million Austrians Sunday to elect the new president. The choice of a left-wing candidate, ex-leader of the Greens, Alexander Van der Bellen, and a right-wing populist, Norbert Hofer of the FPÖ.

In May Van der Bellen won a close call, but the result was declared invalid because of problems with the vote by correspondence. The election on Sunday now decide who the successor of the Socialist Federal President Heinz Fischer. The president has a largely ceremonial role.

When the 45-year-old Hofer Sunday comes as the winner, he is the first of the current right-wing populists in Western Europe, kicking the head of state. His rival is a 72-year-old economics professor, Van der Bellen. The name is a legacy of his ancestors who came around 1700 from the Netherlands to eastern Europe.

Taken over the whole country seems to be a neck-and-neck race. But in the cities, including capital Vienna, Van der Bellen won in May. The supporters Hofer mostly live outside the city, where he in most constituencies received the most votes.