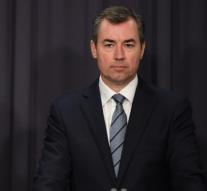 sydney - Immigrants from Australia will soon have three months to submit their illegal weapons without sanctions. That has decided the government in an effort to reduce the number of illegal firearms. Some of these have been used in IS-inspired attacks in recent years.

'We live in a time when our national security has been demolished. Unfortunately, we have to find that illegal terrorist attacks in Australia have been used, 'Justice Minister Michael Keenan said. He announced that residents could hand in their weapons from 1 July without being prosecuted for it.

Australia has banned all semi-automatic weapons and has very strict rules for possession of weapons. However, a report in 2016 reported that 260,000 illegal weapons are estimated to be in circulation.