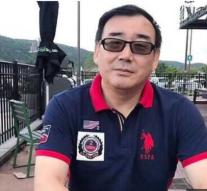 beijing - The writer and former Chinese diplomat Yang Hengjun, who is now an Australian citizen, according to one of his friends was arrested by the Chinese authorities.

Yang was on a New York flight to the southeastern Chinese city of Guangzhou on Saturday and would arrive at five o'clock in the morning by appointment, said Feng Chongyi, associate professor of China Studies at the University of Sydney. Yang would then take a connecting flight to Shanghai with his wife and daughter, but according to Feng he did not come through security.