Home / World / Australian premier Turnbull has to clear the field 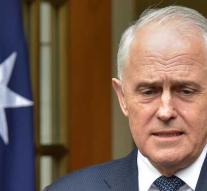 canberra - Australian Prime Minister Malcolm Turnbull resigns after a power struggle within his own Liberal party. Australian media reports that Friday. Turnbull is succeeded by Scott Morrison, the current Minister of Finance.

Turnbull must clear the field after party members turned against him. During the subsequent vote on the leadership of the party, three candidates participated. In addition to Morrison, these were the former Minister of the Interior Peter Dutton and Foreign Minister Julie Bishop.