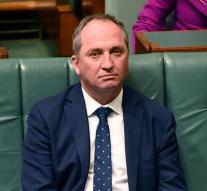 sydney - Australian Deputy Prime Minister Barnaby Joyce said on Monday that he may have a dual nationality and can not take part in parliament.

Joyce was informed by officials last week that he has both Australian and New Zealand nationality. In Australia, politicians can not participate in parliamentary elections if they have dual nationality. A couple of weeks ago, two senators had to resign.

Joyce was born in Australia. His mother is Australian and his father was born in New Zealand as a British citizen. 'I nor my parents have ever had a reason to believe that I can be a citizen of another country,' said Joyce Monday.

Joyce has asked the Australian Supreme Court to bend over his case.