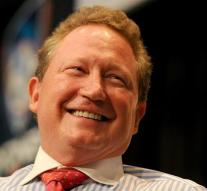 sydney - Australian businessman Andrew Forrest (55) wrote Monday's history by giving $ 400 million (about 265 million euros). According to the Australian government, it is the largest philanthropic gift from the country's history.

Forrest and his wife Nicola announced the news at the Canberra Parliament Building. They want the money to be spent on research into cancer, education and combating modern slavery.

Australian Prime Minister Malcolm Turnbull called the donation a 'game changer' within the philanthropic community. He praises the billionaires 'love and dedication', which, according to the Financial Review, stated that they would not deduct the record donation from the tax.

The mining magnet is one of the richest men in Australia. Its assets are estimated at more than 3 billion euros.