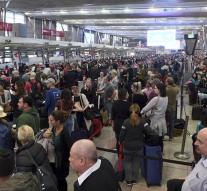 melbourne - The increased control of airline passengers and their luggage at Australian airports continues for an indefinite period. This said the Australian Immigration Minister Peter Dutton on Monday.

On the weekend, four men were arrested in suburbs of Sydney who, according to the police, were planning to 'drop a plane'. It would be conspirators inspired by Islamic extremism.

The police did not say anything about what the four would have been. Local media reported that they were suspected of wanting to bring a bomb or poison gas on board an airplane.