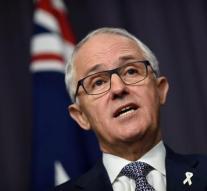 canberra - The Australian economy could use some more innovation and, therefore, Prime Minister Malcolm Turnbull Monday to $ 1.1 billion to pull (about 750 million euro) for the technical sector.

" This is not about prosperity as it took place in the mines; This is a revival that could forever continue ", Turnbull reports on the desired boost of the technical sector in his country. " I know that Australians believe in themselves. I know we are a creative and imaginative nation. We need to embrace risk and experimentation. "The 750 million euros will be paid to inter alia innovative entrepreneurship, science, and education. Thus, subsidies should ensure that talent willing to risk. The extensive list of plans also include computer and codeerwedstrijden, campaigns to combat digital illiteracy and ICT camps.Pulling out the budget stands in stark contrast with the line that started Turnbulls predecessor Tony Abbott. Last year, put it even cuts in the budgets for science. What Turnbull concerned, there is no argument for those cuts, which result in damage only, he says. " Companies that embrace innovation are more competitive. Their market share is growing, and they provide more jobs. "
NEW