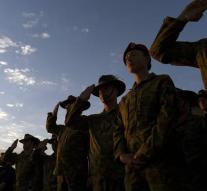 melbourne - The inspector-general of the Australian armed forces investigates 'rumors' about possible war crimes of Australian soldiers in Afghanistan. He asks anyone who knows more about it to contact him.

The call follows reports from Australian public broadcasting in July about the cover of the death of an Afghan boy. Documents have also been leaked about secret operations of Australian special units.

Australia is a major ally of the United States and has since 2002 soldiers in Afghanistan. Currently there are about three hundred Australian soldiers in that country.