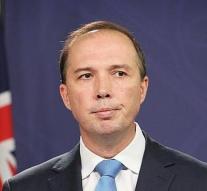 brisbane - Australia has set an ultimatum for illegal refugees in the country. If they do not submit an application for asylum before October 1, they will be expelled.

The Minister of Migration Peter Dutton announced the ultimatum on Sunday in Brisbane. As far as known, about 7500 boat refugees have been living in Australia for more than five years, but have never attempted to become officially resident.

With the ultimatum, the Australian government wants to prevent more refugees from coming to the country by boat.