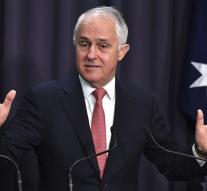 melbourne - Australia wants to take thorough steps to protect the public in shopping streets and at events against vehicle attacks.

The national strategy will be unfolded a few days after the bloody attack in Barcelona. Reason for the plan was the terrorist attack last year with a truck in Nice, where 84 people were killed.

In January of this year, a man with a car entered a pedestrian in Melbourne, causing four people to be killed and more than twenty people injured. Then there was no terrorist motive. Since then, 140 concrete poles have been installed in that city to protect pedestrian zones.