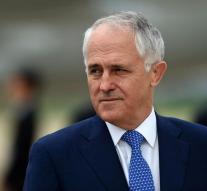 sydney - Security services in Australia are on edge after IS has called on Australians to kill its citizens. The Australian prime minister Malcolm Turnbull takes the threat very seriously.

The call: 'Kill them wherever and however you can,' is done in the new magazine of the Islamic State, Rumiyah. The magazine is an obituary of a recently fallen IS-warrior from Australia. 'Put them down, shoot them, they drive over them with vehicles and toxic,' the terrorist organization asks his sympathizers in the country that performs a hard fight against IS.

The Australian government fears of attacks at major tourist attractions such as the Sydney Opera House or the huge MCG stadium in Melbourne.