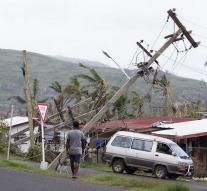 canberra - Australia has sent a military ship carrying aid to the Fiji Islands. On board include medical supplies, food and water treatment equipment. There are also two helicopters on board to reach people in remote areas.

Thus Australia is trying to help the residents after tropical cyclone Winston last week left a trail of destruction. By the force of nature, come on February 20, have so far 42 people dead and an estimated 62 000 of the approximately 900 000 islanders homeless. In many places is still no water and electricity is a major problem. Winston was the worst cyclone ever to hit the southern hemisphere.

The ship with 60 tons of relief supplies is Friday departed from the eastern Brisbane and is expected to start next week in the waters of Fiji.