Home / World / Australia baffled to die woman in US 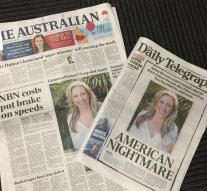 canberra - Australian Prime Minister Malcolm Turnbull demands clarification by the US authorities about the death of Australian Justine Damond. She passed away after she was shot by the police in Minneapolis (Minnesota). Turnbull mentioned that Wednesday in an interview 'shocking' and 'inexplicable'.

Damond died last weekend after an agent had shot her through the window of a police car. The woman walked into her pajama after calling the police. She suspected that an assault occurred in her neighborhood.

Turnbull responded Wednesday to the death of his country companion. 'How is it possible that a woman asking for help in the street in her pajama is shot in this way?' He wondered aloud. 'We require answers on behalf of her family. ''

One of the agents involved, Matthew Harrity, said, according to local authorities, being shocked by noise at his patrol car. When Damond appeared next to the car, the other agent in the vehicle fired his weapon. Both men were sent on leave.