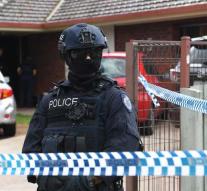 melbourne - Anti-terror units have arrested three men in the Australian city of Melbourne suspected of plotting a terrorist attack. According to the police, they wanted to carry out an attack on a busy spot and kill as many people as possible.

The men of 21, 26 and 30 years, who were probably inspired by Islamic State, have been monitored since March. They used encrypted messages to communicate and tried to get semi-automatic weapons. According to the police, the intended attack would have killed many people.