Home / World / Australia and US agree on asylum seekers 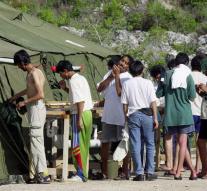 canberra - Australia has signed an agreement with the United States on the resettlement of refugees currently in reception centers on Manus Island in Papua New Guinea and Nauru. That Australian Prime Minister Malcolm Turnbull said Sunday.

In the controversial detention camps are held over a thousand refugees. Turnbull did not bring out details. It is unclear how many people have been reinstated and when that will happen.

However, he said that women, children and families a priority. The deal will not apply to future asylum seekers who want to reach Australia, said the prime minister.

The government was already known to close the camps on the islands of Manus Island and Nauru. Asylum seekers who make an effort to come to Australia, brought there to discourage so in order to make the crossing in small boats.