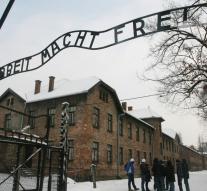 detmold - The German prosecutor brings a 93- year-old man to trial for complicity in murder in the Auschwitz concentration camp. Doctors have indicated that there are no medical objections to judge the man.

Elderly from Lippe was, according to the Prosecutor's Office between January 1943 and June 1944 involved in the death of at least 170 000 people.

The case is heard by the court in Detmold, North Rhine- Westphalia. And geriatric psychiatric examination of the suspect man have shown that the session can handle days of in each case two hours. The court has yet announced a date for the trial.