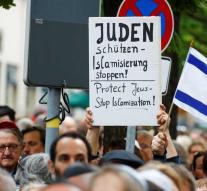 berlin - Thousands of people have taken to the streets in a number of German cities to show their solidarity with the Jewish community and to express their concerns about growing anti-Semitism. Many demonstrators wore a yarmulke, the traditional Jewish head covering.

The police said that in Berlin alone, more than two thousand people were involved in the so-called 'keppel's march'. Also in, among others, Cologne, Erfurt, Magdeburg and Potsdam, people with keppels went out into the streets.

Earlier this week, the Central Jewish Council in Germany advised Jews not to wear yarmulks in large German cities. The reason for the warning is an incident last week in which an Israeli with a yarmuler on the street in Berlin was attacked by a Syrian refugee with a belt and abused. According to figures from the police in the German capital, the number of anti-Semitic incidents has doubled since 2013.