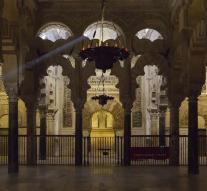 madrid - After the attacks in Spain last week, the number of attacks on Islamic targets in the country has risen dramatically. At least four mosques in Granada, Fuenlabrada, Logroño and Seville have reported reports of destruction and attacks in recent days. 'We record these days a brutal wave of hostility to Islam,' the Spanish Civilian Platform says against Islamophobia in the newspaper El Paìs.

In Seville the walls of the main mosque were covered with lies. In Granada, members of the right radical organization Hogar Social attacked a mosque with smoke bombs and firepiles. On the Internet, more attacks and insults are also counted against Muslims, and also on the streets are Muslims vulnerable and threatened.