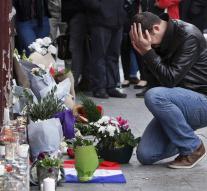 paris - The attacks in Paris are as it now appears committed by three teams of terrorists. That concludes the French public prosecutor, as did prosecutor Francois Molin Saturday at a press conference.

The attacks are definitely fall 129 deaths. There are 352 people injured. Of these, 99 are in critical condition, said Molins. There are seven slain terrorists. One of the terrorists at Bataclan concert hall sowed death and destruction, has been identified as a Frenchman, born in 1985 in Evry. He was an acquaintance of the intelligence services because of his radical views.

Among the fatalities are definitely five foreigners : two Belgians, a Portuguese, a Spaniard and a Briton.

According to the Ministry of Foreign Affairs in The Hague three Dutch have been injured, two men and a woman.