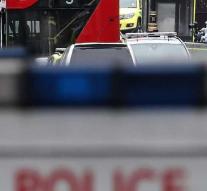 london - The man who on Tuesday morning near the British parliament in a car at high speed on cyclists and came to a halt to a safety barrier, is a 29-year-old Briton. The authorities regard the incident as a terrorist act.

At least three people were injured. Agents were able to arrest the driver on site.

'Since there seems to be intentions and given the method and the fact that this is an iconic location, we treat it as a terrorist incident,' said the head of the British anti-terrorist service, Neil Basu. No weapons were found in the car.

Basu says that the suspect is not known to the security services and that he does not cooperate in his interrogation. British Secretary Ben Wallace said that he is a British citizen who 'originally came from another country. 'The man would come from the Birmingham area, reported sources to the BBC.