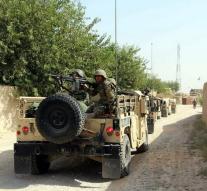 kabul - In an attack by the Taliban on a convoy of tourists in Afghanistan Thursday seventeen people would have lost their lives.

Among the dead were three Americans, six Britons, two Scots and one German. Five people were injured.

The brutal attack took place on a road between the provinces of Bamyan and Herat. The convoy would have probably hit by a rocket. What did the tourists in Afghanistan is unclear.