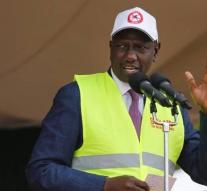 nairobi - Armed men sacked the house of Kenyan Vice President William Ruto on Saturday. That happened while the politician was not home. The attackers grabbed an agent's firearm outside the house and shot him down, according to a local newspaper.

The attackers would still be in Ruto's home. Security forces have surrounded the building and try to overcome the intruders, according to a government official. About the identity of the men nothing has been announced yet.

Ruto left local media shortly before attacking home to run campaign. Kenians go to the polls in early August. President Uhuru Kenyatta, Ruto's boss, hopes to be re-elected. He has not responded to the attack on the property of Ruto in the west of the country.