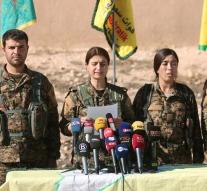 damascus - The Syrian Democratic Forces (SDF), a rebel group that receives support from the United States, on Sunday began a military operation leading to the recapture of Raqqa, the capital of the self-proclaimed caliphate of Islamic State (IS). The rebel group has set up a command center.

Commanders of the SDF said at a news conference in the Syrian town of Ain Issa that the US military will provide air support.