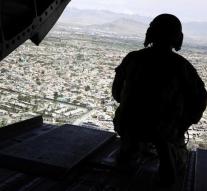 cabul - A suicide attack near the US embassy in the Afghan capital Kabul has killed four deaths and 22 injured on Wednesday morning.

That reports on emergency workers on the spot. The attack was aimed at a convoy of armored vehicles used by NATO troops in Afghanistan, so witnesses and security officers reported.

The explosion that, according to security forces, was caused by a suicide attack, also destroyed several civic vehicles in the near vicinity.