Home / World / Attack on Mosul occupied by IS begun 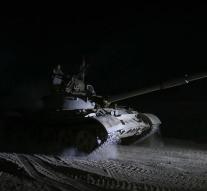 - The military operation to retake the Iraqi city of Mosul on terror organization Islamic State (IS) started in the night from Sunday to Monday. That Iraqi Prime Minister Haider al-Abadi said on national television.

Reported earlier, Turkish and Iraqi media all that an offensive is imminent. Mosul is the second biggest city in Iraq. The city is of great strategic importance for IS.

According to CNN, the Iraqi army Saturday thousands of leaflets four-page spread above the city, with lyrics like 'it's time for victory 'and' time for a clean Iraq without Isis or another dark faith. 'It is also common in the flyer that an attack is being prepared.

The northern stronghold Mosul IS owned since June 2014.

The offensive to dislodge terrorists from the big city is prepared for months.

Iraqi Prime Minister Haider al-Abadi said earlier that he wanted to liberate Mosul by the end of the year. Rather, it was questionable whether the necessary troops would be ready on time.