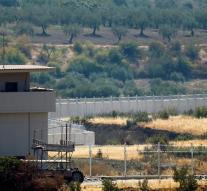 - In northern Syria near the border with Turkey on Thursday detonated a bomb. At least sixteen fighters came from a Turkish-backed militia in the crash, reported the Syrian Observatory for Human Rights. Two witnesses in the area say there are at least twenty dead and an unknown number wounded.

The explosion took place at the border crossing Atmeh. According to the Observatory is still unclear whether it was a suicide attack. The responsibility has not yet been claimed.

The militia backed by Turkey competes in the region against Islamic State. To another part of the border, more to the northeast, the militia is fighting with Kurdish fighters.