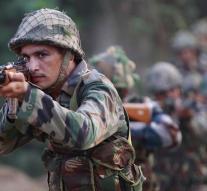 - An Indian army camp in the north of the disputed Kashmir region Sunday attacked by at least six militants. A border guard is thereby killed and another was wounded, the police said.

During the attack was shot repeatedly over and over again. Local media report that two attackers were killed, but that is not confirmed. Two weeks ago, in the same region nineteen soldiers killed in a similar attack.

Thursday India carried out attacks on terrorist bases in Kashmir. Which were on the Pakistani side of the demarcation line that divides the region into an Indian and Pakistani Kashmir. According to an Indian army chief commit terrorists from Pakistani territory attacks on Indian targets.