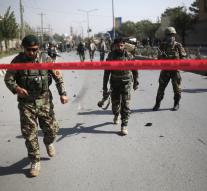 kabul - In the Afghan capital Kabul on Sunday, a bomb attack perpetrated on a convoy of foreign troops . A spokesman for the Interior Ministry there are victims , but it is unknown yet how much.

The attack in the center of Kabul , which comes after a period of relative calm after a series of bombings in August was claimed by the Taliban . Television footage shows that an armored vehicle on its side ligt. Also by the US-led military coalition Resolute Support confirmed the attack.

They could even mention anything about casualties. Resolute Support total 13,000 soldiers from forty countries, of which 6800 Americans. Netherlands currently has nearly one hundred soldiers in Afghanistan. The attack comes at a time of heightened tensions following heavy fighting between government forces and the fundamentalist Taliban around the northern city of Kunduz.