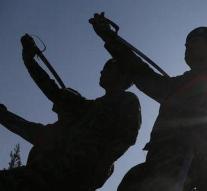 cabul - By a bomb bomb attack on a Danish convoy of the NATO Resolute Support Mission in the Afghan capital Kabul, five civilians were injured on Sunday. That reports the Afghan security services.

The attack took place in the Afshar district in the west of the capital. The NATO Mission Resolute Support trains and advises senior officers of the Afghan army and the police. Resolute Support Headquarters can not confirm the assessment.