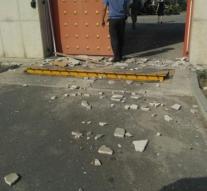 - A man on Tuesday with a car with explosives tried to drive into the Chinese Embassy in Kyrgyzstan. The man did not go beyond the fences and was slain in the explosion of the car bomb. According to Kyrgyz media, there are at least three people injured.

Kyrgyzstan is a mountainous country neighboring China which was until 1991 part of the Soviet Union. The country is one of the few democracies in the Central Asian region and has almost six million inhabitants.