Home / World / Attack on bus with refugees in Germany 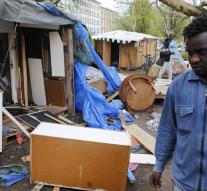 jahnsdorf - A group of thirty people in eastern Germany has attacked a bus carrying refugees on arrival at a refugee center. The group on Thursday held the first bus to the village Jahnsdorf and then threw objects and fireworks, police said Friday Leipzig.

The bus driver hit by a firecracker injury to his foot. Also entered a window of the bus shattered. Asylum seekers are now housed in other accommodation.