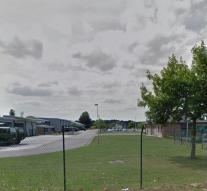 - In the Belgian Flawinne, near Namur, a foiled attack on a barracks of the paratroopers. A car would be driven according to local media through the fence around the barracks and subsequently fired.

Some soldiers have prevented the car arrived at the barracks. They opened fire when the man wanted to drive through the gates. The man is then beaten on the run.

His car, a black Ford Escort, was not found near the barracks. There could be a bomb in the car and that is why a team of Belgian bomb squad on the way forward. The man himself is still missing. According to the Flemish newspaper De Morgen hold a special intervention unit of the police manhunt. The owner of the car is already known - it is a native of Namur - but it is unclear whether he is the person who committed the attack.
'Fighting Back'

Official bodies confirm the news. Thus says the attorney of Namur against De Morgen: "If you look at it as an outsider, it seems incomprehensible why your military barracks attacks There are enough weapons there to fight back.?."

There are about 650 soldiers stationed in the barracks, even the most off Monday on an exercise. The complex on Rue Joseph Durieux also includes a museum about the 'Corps de Garde'. The village is situated on the river, a few kilometers from the city of Namur.

#BREAKING: #Belgium: shots were fired at a car that rammed the gate at the military base #Flawinne pic.twitter.com/9ekzpUgvUX