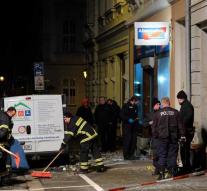 dobeln - For the party office of the right-wing populist AfD in the German city of Döbeln in the state of Saxony, an explosion took place on Thursday evening.

According to the police, an unknown substance has exploded. There are no injuries.

The background of the explosion is not yet clear. The police take into account a politically motivated crime, informed the police chief of the Leipziger Volkszeitung. The Public Prosecution Service is investigating the incident in the city between Leipzig and Dresden.

Buildings and windows have been damaged on the premises and adjacent buildings. Several cars have also been damaged.