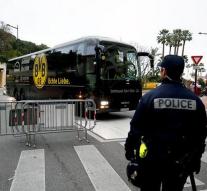 dortmund - The German court considers the attack on the player bus of Borussia Dortmund football club on April 11th as an attempted murder. The 28-year-old suspect Rus Sergej V. has to rely on the prosecution for 28 cases of attempted murder, as much as the coach occupied.

There is no terror, and the suspect only acted. His motive was unambiguous: money-winning. W. wanted to speculate on a fall in the share of Borussia after the attack. He had hung explosives in a hedge and brought it from a distance to explosion when the bus went by. There were two injured, an agent and Marc Bartra player, who would stay injured for several weeks.

The players bus was on their way from the hotel to their own stadium, where Borussia would play against AS Monaco in the quarterfinals of the Champions League. The match was postponed one day.

Sergey V. was arrested not long after the attack in Rottenburg am Neckar, where he lives.