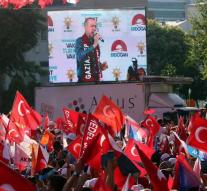 ankara - In Turkey, fourteen suspects were arrested who, on behalf of the terrorist movement, wanted to attack Islamic State on the election day, next Sunday, in Turkey. This was reported by the Turkish state press agency Anadolu.

The arrests and house searches were at the same time Monday in several houses in the capital Ankara. All arrested persons are foreigners. The news agency reported that a lot of material was confiscated, but what was not disclosed. Nor has the nationality of the suspects been brought out.

On Sunday there are presidential and parliamentary elections in Turkey. Six presidential candidates have presented themselves and eight political parties have taken things to the six hundred seats in the new parliament.