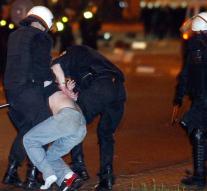 warschau - Employees of an Israeli football club have been attacked by Polish hooligans Wednesday night near Warsaw. The Polish government condemned the attack on Thursday, which calls the Israeli embassy 'anti-Semitically motivated'.

After a friendly match between the Israeli football club Petah Tikva and the Polish club MKS Ciechanow, the Israeli football players went to the hotel lobby while the staff were cleaning up. The Israeli team coach told the newspaper The Jerusalem Post that had waited fifteen to twenty masked skinheads until the police were gone. Then they ran out of the bushes and attacked the staff.

The Israeli footballers shot to help, after which the attackers flew. The police could arrest various skinheads.

Two employees became light-wounded during the attack. The Israeli Embassy in Warsaw says to be shocked at the incident. Spokeswoman Michal Sobelman says that 'these fake fans are not only damaging Polish-Israel relations, but also affecting Poland's image abroad. '