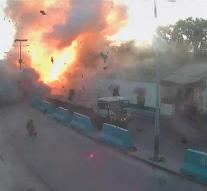 Most of the dead are police officers of a hotel. The attackers hit the entrance of that hotel by car in the center of the capital. Rifle fire was heard immediately after the explosion.

Other militants have then taken care of twenty people. The fate of that group is still unknown, according to the police, who has surrounded the hotel.