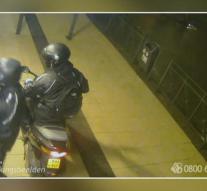 breda - Two ATMs in Breda and Made have been a target of hackers in April and May. Two men tried to transfer the operating system to empty the ATMs. The police say that attempts by good security have failed.

Impressions of the perpetrators were shown in the regional investigation program Bureau Brabant on Monday evening. The surveillance images show how the same two men drill a hole in the vending machine and try to get access by connecting a laptop. The police say that this method of cracking an ATM has not been seen so often.

The first attempt was made in Made on April 13th. On April 21, an ATM in Breda was the target and the most recent attempt was at the same place last Friday.