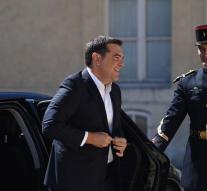 athens - The Greek government expects that the EU keeps its promise to come up with debt relief. That the Greek Prime Minister Alexis Tsipras told the Sunday newspaper Real News. According to Tsipras,, EU sleepwalking towards the precipice 'by adhering to strict austerity policies, the gap has widened between the Member States.

The creditors of Greece to go in the fall to see how far the government in Athens has progressed with the required reforms.,, Greece has kept his part of the bargain and we expect the same from our partners, '' said the Greek Prime Minister.,, We not only ask for specific measures to make the debt bearable, we require. ''

The International Monetary Fund, one of the creditors, has stated that the requirement of a budget surplus of 3.5 percent in 2018 is not realistic. The IMF wants to relax the requirements, but include the German Government would stick to the strict conditions imposed on the emergency loans.